CHRISTAAN FELBER ON THE MAKING OF HIS DIRECTORIAL DEBUT, THE AWARD-WINNING SHORT FILM "FROM HEAVEN IS CALI"

Photographer Christaan Felber has published two books of his work, Boxeo Classico and Night Walkers, photographed a portrait of the late recording artist Mac Miller so iconic that fans around the world have gotten tattoos of it, and shot campaigns for brands ranging from  Apple, Puma, Nike, and Google to Samsung, The North Face, Park MGM, and Crown Royal. But one thing he has not done is make a movie. Until now.

His short film, From Heaven Is Cali, is a shimmering, electric, and ultimately soulful portrait of the salsa-dancing scene in Cali, Colombia. It’s still making the festival rounds but is already connecting with viewers and winning awards, including the Best Cinematography honor at the New York Feedback Film Festival. To make the film, the New York-based photographer had to navigate a culture very different from his own, a language he is not fluent in, and the learning curve of working in an unfamiliar medium. Here, he talks about the inspiration, the process, his collaborators, and the new friends he made along the way. 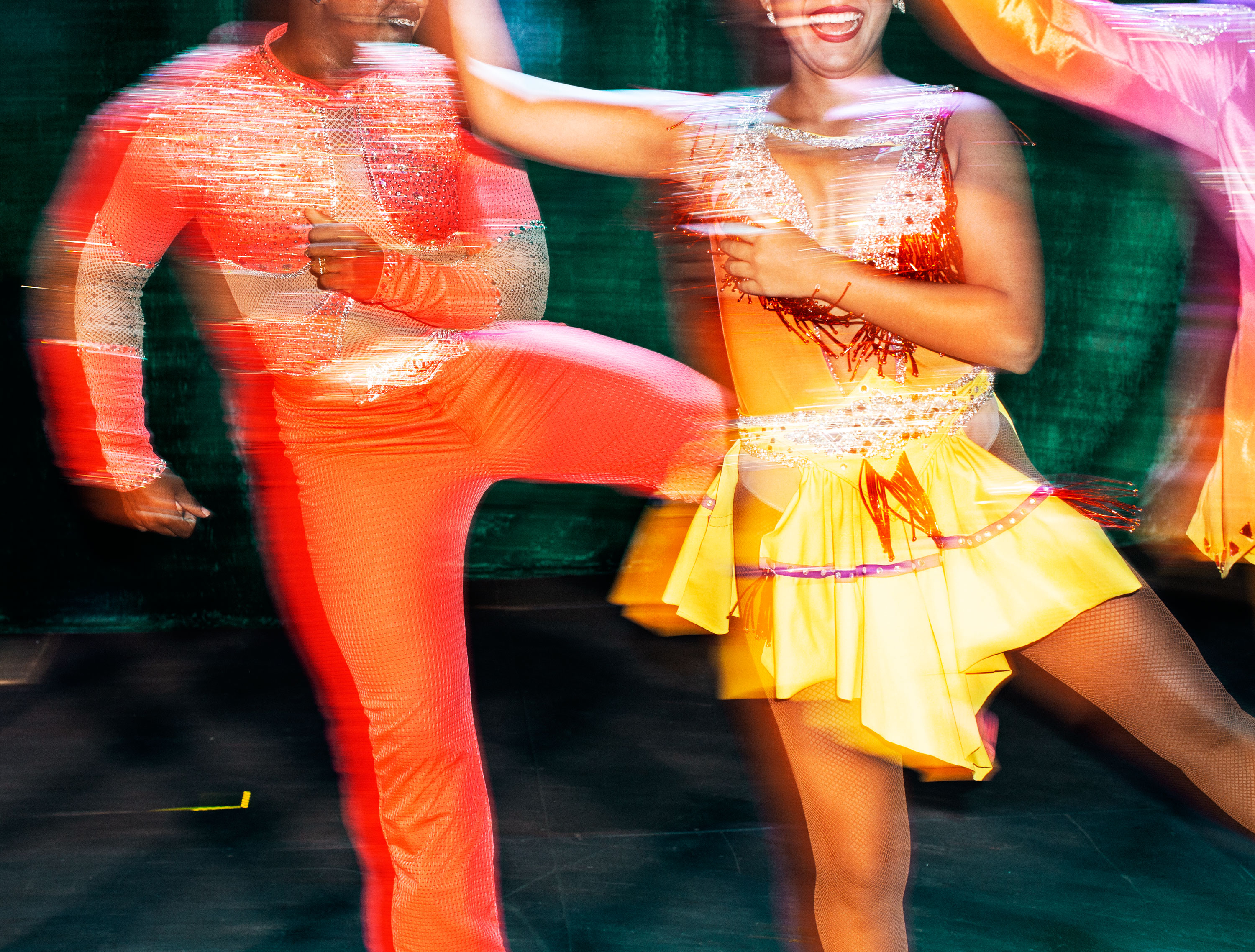 You’re an American photographer. What is your connection to the Colombian salsa scene? And can you describe the scene for those who haven’t seen the film?

I first found out about the Colombian salsa scene through my girlfriend, Jeniffer Agudelo, who also produced the film. We traveled to Cali to see her family, and I often like to shoot personal projects while traveling, so I did a bit of research and found out that Cali is known as “the world capital of salsa.” I decided it would make a good photo essay, which I shot and then published, but realized that the motion and music of the salsa scene would work really well in a motion medium, so I decided to make it into a short documentary film.

For those who don’t know, the salsa scene in Colombia, specifically Cali, is everywhere: From the nightclubs to the shows to the music collectors and DJ’s to the dancers, salsa dancing is more than just an art form or musical style, it’s a way of life.

Over what period of time did you shoot the footage we see in the movie?

I shot the footage over the course of a week, although I had already established connections with the majority of the dancers while shooting the stills a couple of months earlier.

How many visits to Colombia did you make? And how did you navigate the language difference?

I made one weeklong visit to Colombia. I was able to navigate the language difference with the help of Jen, my producer, who also acted as the translator. The most difficult part, though, was translating and editing all of the interviews. We had to essentially hire a translator who was well-versed in not only Spanish but in the local dialect. It made the entire editing process so much trickier!

Give us a sense of the scale of this production, and share your process for building your team.

This production was as minimal as I could make it without sacrificing quality. On “set,” we had myself, a DP/camera operator (Zach Sky), a producer, and a sound guy. It was important to work this way for a couple of reasons: I wanted the subjects to feel as comfortable as possible and not be overwhelmed by a large crew, and I wanted to be as nimble as possible so we could easily move from location to location and not attract a lot of attention, since Colombia is not always the safest place.

In terms of building my team, I tried to use as many locals as possible for both budget reasons as well as for their familiarity with the region, language, and culture. Jeniffer, who is originally from Colombia, reached out to several local sound guys and found Carlos Segovia, who had a lot of previous experience on major feature films. We also found a local drone operator, who shot all of the landscape shots, and a local driver who knew the streets of Cali like the back of his hand, so driving became one less thing to worry about. Zach and I had worked previously on a commercial job, and I knew we had a similar aesthetic (shooting handheld in naturally lit settings) and that he was calm under pressure, so I knew he was the man for the job.

Film and crew on set.

The movie is nonfiction, but it’s also not quite a documentary. You’re not relaying facts and figures about the scene or chronicling the history of salsa in Colombia. It’s expressionistic. Talk about what you wanted to say and show with this movie.

I wanted to try and steer away from the typical documentary in order to create more of a feeling and an experience than of a linear narrative. I liked the idea of creating a series of vignettes that could be assembled as a collage in order to try and create a more three-dimensional experience. It’s also nice to not have the typical “talking head” interview with a narrator because it often takes me out of the experience. That being said, I don’t think there necessarily has to be a point to make: Experiences occur and then get filtered through our own perspectives, so I wanted to create more of an open-ended experience that the viewer can take what they want from.

You focus on a range of dancers in the film, male and female, young and not so young. How did you find your subjects, and what made them right for this film?

I found the dancers during my first trip to Cali when I was shooting the photo essay. Our producer did a great job researching the local salsa scene and found a way to connect us with Delirio, which is the largest salsa show in Colombia. Those connections grew organically to involve people who span the salsa industry. We made sure to seek out a range of musicians and dancers to have as many options as possible. We actually had a few other characters such as record collectors and music historians that we filmed and interviewed, but it felt like they didn’t fit into the puzzle as I had initially hoped. It’s a tricky process because there’s so much footage I loved but simply couldn’t include because it was beginning to get too long. My goal was to create something that was fast-paced and didn’t give the viewer an opportunity to leave the world they entered for the duration of the film, which is always a challenge.

Christaan photographing the dancers at Delirio during rehearsal. 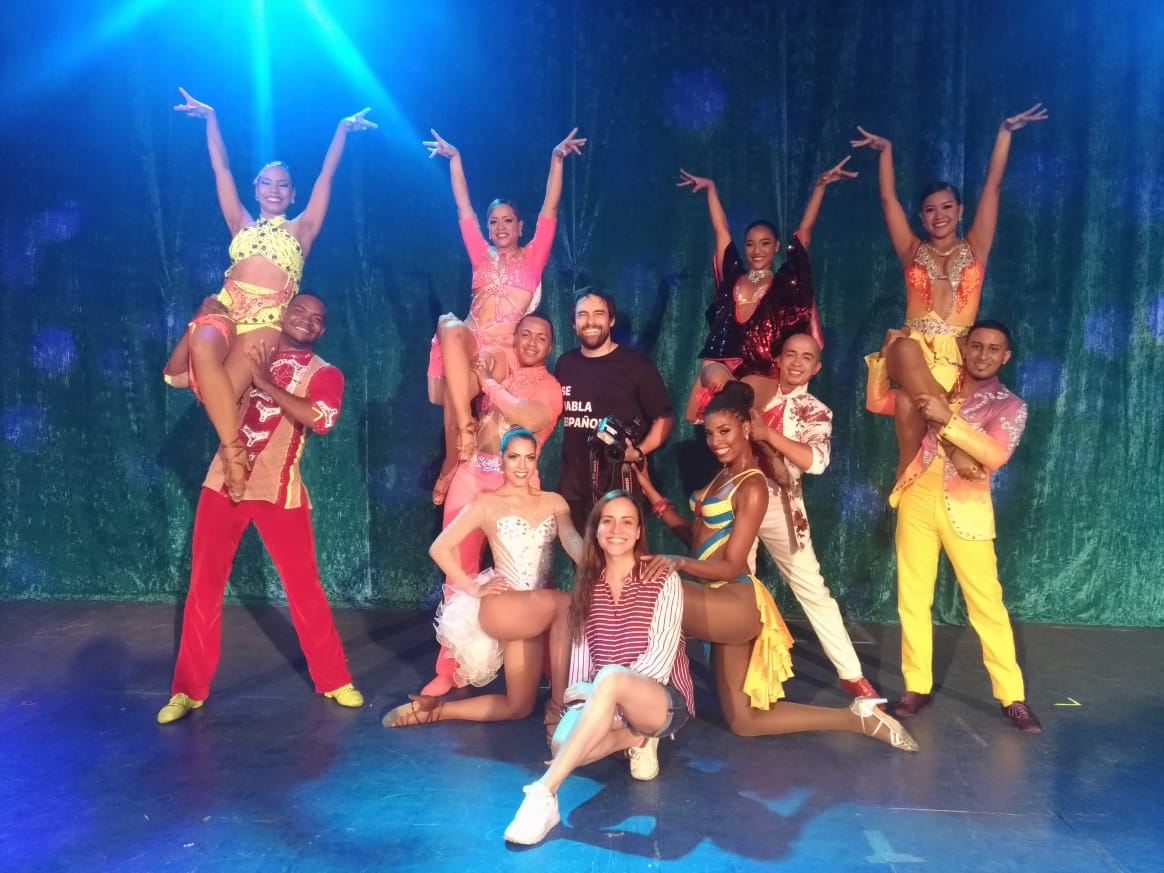 Christaan and Jeniffer with the dancers.

You’ve previously talked about how this movie explores the intersection of film and photography by way of “moving portraits.” Explain what you mean by that and why that approach is important to this project.

I’ve always loved the end sequence to the movie The Motorcycle Diaries, which features these beautifully composed portraits of people staring at the camera with this haunting music playing in the background. It’s so interesting to me, because when we see a photograph it’s easy to forget that there’s information both before and after that moment. The moving portraits, I feel, force the viewer to interact with the subjects on a different level that, in a way, feels more intimate. The beauty of film is being able to further mold the experience through voiceover and sound, so it really becomes a much more “three-dimensional” portrait of someone. I honestly have to say that I was initially intimidated by the thought of directing, but once I started doing it, I found that I really enjoyed the experience and actually felt very much at home. It’s definitely something I want to continue to pursue!

This is your first film. What storytelling possibilities did you discover working in this medium that aren’t possible with photography?

Making a film requires such a different way of thinking that is both challenging but also very exciting. It’s so much more about rhythm and flow than about capturing that one specific moment, so you have to be more aware of not just the singular moment, but everything before and after it as well. I know this sounds obvious, but I think it opens up the possibility of being able to tell stories that are more complex and richer because there’s more information: the sounds, the movement, the expressions, the music, the words, the writing. It’s incredibly complicated, and I honestly can’t wait to delve further into the medium. 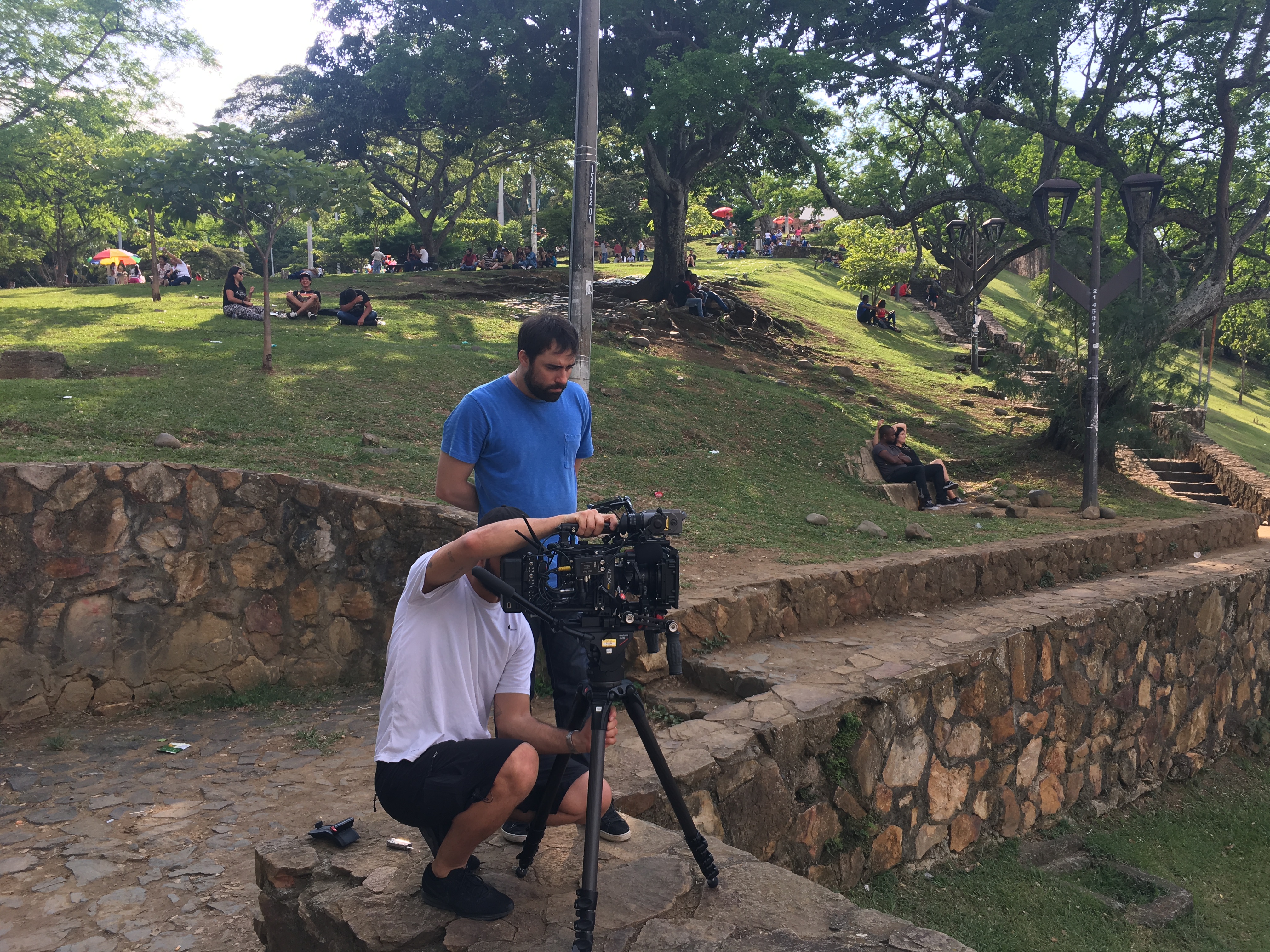 It’s been said many times that a film is made in the editing room. Who did you work with on the edit, and what was that collaboration process like?

The most difficult part of the production was the editing, since it was incredibly challenging to find someone within my budget who had the aesthetics I was looking for and was willing to tackle a documentary project. Luckily, my agent Jen Jenkins connected me with Nic Hill from Sawhorse Productions, who was great to work with and did an incredible job of assembling the footage. Following that, Ryan Smith and Rachel Hamburger, from Whitehouse Post, put on the final editing touches to get it over the finish line. I like to compare the editing process to cooking: It’s the director’s job to gather as many “fresh ingredients” as possible (footage) and then the editor and director work together to “cook” it into something cohesive and hopefully delicious. During the editing process there was a lot of back and forth, sharing of references and outlines, as well as fine-tuning the cuts/footage choices. It’s a very collaborative process that requires trust and patience. Everyone was extremely accommodating and helpful, and it made me realize how important having a great team behind your project really is.

What were a couple of the highlights of making Heaven Is Cali?

The crew and dancers together on set.

Trying to learn how to dance. The father of one of the dancers tried to teach me the basic dance steps, and they make it look so easy! It was a lot of fun, though, and made me realize not only how artistically talented all the dancers are but athletically as well.

Another highlight was when Camilo, one of the dancers we see toward the end of the documentary, came to visit NYC. We all wound up meeting up, drinking sangria together, and then he came over and we all danced in the middle of my small apartment. It was kind of surreal, but also amazing to see the connections we made!

Below, the trailer for From Heaven Is Cali. See Christaan’s salsa photo essay here.